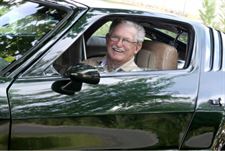 Chesley (Ches/Chester) Williston Sr., husband of Myrtle (Cain) Williston, passed away at the Miramichi Regional Hospital on July 27, 2022 at the age of 84.

Born in Miramichi, he was the son of Raymond and Elizabeth (Gray) Williston. Ches was a Red Seal pipefitter and plumber, who retired from Repap in 1992 where he had been a supervisor for many years, first at the kraft mill and later at the coated paper facility. Additionally, he was often called upon by friends and neighbors for his expertise in repair. Ever the tinkerer, nothing was ever ready for the garbage bin until he had taken a crack at fixing it. A lover of antique cars, he could often be found at car shows, browsing, chatting and showing off his beloved 1975 Bricklin. But Ches’ first real love was sports. From a young age, growing up in Douglastown, he soon made his mark as a baseball player and hockey player, going on to play with several winning teams in both sports, including goal tending for the Maritime Intermediate Champion Miramichi Beavers at the tender age of 17. Ches continued to play ball and hockey until well into his forties, and gave back to the sports through coaching many minor league youth hockey and baseball teams over the years. When he wasn't coaching, he was cheering on his children and granddaughter as they played their respective sports, and even learned to appreciate the finer points of basketball and volleyball, even if they weren’t “real” sports!

He is survived by his loving wife of 58 years Myrtle of Whitney, daughter Stacy (Williston) Thorne, son Chesley Williston Jr., step-son Blake Cain, and his only grandchild Haylee Williston, who was indeed the apple of poppy’s eye; his brother Robert (Buster) Williston of Blackville; many nieces, nephews and extended family members.

Ches was predeceased by his parents, caring sister Grace (Williston) Jones, several brothers- and sisters-in-law and his son-in-law Ellison Thorne.

The Family would like to thank the Miramichi Regional Hospital Staff for taking such good care of Dad throughout his lengthy illness.

At Ches’ request, there will be no visitation or funeral service. There will be a graveside committal service at the Presbyterian Cemetery, Boom Road on August 2, 2022 at 2 pm.

As expressions of sympathy, donations to the Miramichi Regional Hospital Palliative Care Unit or St Stephen’s Presbyterian Cemetery would be appreciated.

Arrangements are in the care of Davidson’s Funeral Home, 622-7464 or online at www.davidsonsfh.com, your family-owned, family-operated Funeral Home.