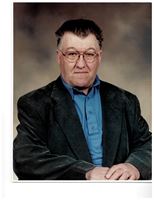 It is with great sadness, the family announce the passing of Eldon Spencer Carr, of Doaktown, NB on July 25th, 2022 at Miramichi Regional Hospital, at the age of 84. Born in Doaktown, NB he was the son of the late Thelma (Cowie) and William Carr. He was a member of St. Thomas United Church, Doaktown.
At a very young age, Eldon went to work at the Russell and Swim Lumber Mill, which later became Irving Sawmill in Doaktown. He remained there until his retirement in 2004.
Eldon's motto in life was simple, enjoy life to the fullest, work hard, be curious, be kind and give to others. Eldon's genuine curiosity about people and their stories allowed him to talk to anyone. He didn't rely on social media but good old fashion conversation to learn about who people were, where they were from, and what made them tick. His masterful networking skills often led him to negotiating a trade for goods and services, often in the form of crafts or collectibles.
Eldon cherished his time with his family whether it was visiting his sister in Burnt Church, traveling and going on adventures with his cousins in St. George and Saint John in his younger years and travelling to Europe to visit his brother in Germany. He loved his time each year connecting with his cousins at the annual Cowie reunion. He doted on his nieces and nephews and treated them as his own children, taking them on adventures, teaching them to play cards and genuinely taking an interest in following and supporting their activities and lives as they grew into adults.
Eldon was a lover of food, laughing, card games (cribbage and auction 45), sports-curling, hockey (Toronto Maple Leafs) and baseball (Toronto Blue Jays), his family, friends and faith. Eldon's personal interest ran the creative gamut. He loved music, especially traditional country and folk music that depicted the logging history of the Miramichi. He would often be the one playing the spoons or the iconic wooden dancing man at any function where this music was played. He also enjoyed a life long passion for crafts, especially wood crafts and rug hooking.These beautiful creations can be found in many a home of friends and family along the Miramichi River.
Selflessness and generosity were two traits that highlighted his personality. He touched the lives of so many people during his life time and will be dearly missed by his sisters - Carrie (Deceased Donald) Weaver, Doaktown, Marion (Charles) Green, Burnt Church and brother Kenneth (Deanne) Carr, Doaktown. Nieces - Sonya Green-Hache, Kim Emerson and nephews - Todd Green, Jerry Weaver, Stephen Carr, Ryan Carr and his great nieces and nephew's whom he adored.
The family would like to thank his caregivers, especially Jeanette Munn and his special friend Sheila Doak. The care he received in the Miramichi Regional Hospital over the last three weeks was greatly appreciated.
A graveside Memorial Service will be held at the St. Thomas United Church Cemetery, Doaktown on august 10th, 2022 at 1:00 PM. Reception to follow at the Legion Branch #23, Doaktown, NB. For those who wish, donations can be made to St. Thomas United Church, Doaktown, or the donors choice. Messages of condolence may be sent to - info@davidsonsfh.com
Arrangements are in care of Davidson's Funeral Home, 622-7464 your family-owned, family-operated Funeral Home.