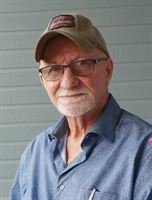 Alvin Joseph Vickers of Miramichi NB passed away Saturday September 18, at Miramichi Regional Hospital, at the age of 68.

Born in Chatham NB, he was the son of the late William and Carmel (Dolan) Vickers. He was a carpenter/Superintendent for Ellis-Don. He was a member of the Roman Catholic Church.

“Al loved travelling the country, and lived in Vancouver, Calgary, Thunder Bay, Southern Ontario, Halifax and the Miramichi area over the course of his life and touched the lives of many people from all walks of life. He was always seeking a new adventure in his life and career so, he was involved with several prominent construction projects across the country including the Hemlo Mine in Marathon Ontario, BMO Centre in Calgary, The Lindsay Park Pool Facility for the Calgary Olympics, Toronto Subway Extension, The Halifax Shopping Centre, and The Irving Headquarters in Saint John. He is also remembered for his love of vehicles, and especially Harley Davidson motorcycles, which he rode all across North America as often as he could.”

Besides his parent, he was predeceased by many aunts and uncles but is survived by Aunt Christina Vickers (no spouse, lives in Howard). Also survived by his former wife Jeannine Vickers, the mother of his daughter, Tracey.

“The Family would like to thank Steve & Colleen Appleby, Patricia McGrath, Kathy Avery, Ronnie Underhill, Phil Hambrook, Dr. Black, Dr. Schwartz, and the hospital staff of the Miramichi Regional Hospital for their help and support during Al’s final months.”

PLEASE NOTE: Covid-19 Protocols will be followed at both visitation and Funeral Mass. Masks, Social Distancing, Hand Sanitizing and proof of Vaccination and identification are required.

Arrangements are in care of Davidson’s Funeral Home (622-7464) or online at www.davidsonsfh.com Your Family Owned – Family Operated Funeral Home.